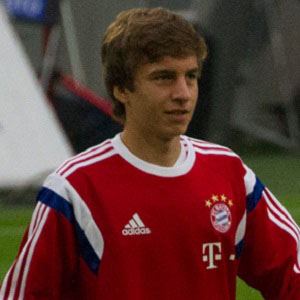 German soccer player who began playing as a midfielder for Bayern Munich during the 2014-15 season. He was the runner-up in the DFL-Supercup in his rookie season.

He was born in Hanau, Germany and played for the Bayern Munich Academy starting in 2004.

In 2014, he became the fourth-youngest player ever to debut for Bayern Munich in Bundesliga.

His father is former soccer player Maurizio Gaudino, who played for Germany internationally.

He was promoted to the Bayern senior club after making an impression on club manager Pep Guardiola.

Gianluca Gaudino Is A Member Of