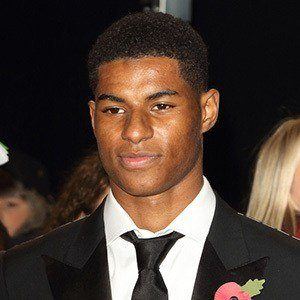 Member of the U16, U18 and U20 England international squads who began his senior career as a forward for Manchester United.

He was five years old when he began playing soccer for Fletcher Moss Rangers. He would join the Manchester United academy system at the age of seven.

He scored three goals in his first five Premier League matches with Manchester United. He was awarded a Member of the British Empire (MBE) in 2020.

He was born in Wythenshawe, Manchester, England. He became engaged to Lucia Loi in May 2022.

He surpassed George Best as Manchester United's youngest ever scorer in European competition with his two goal effort against Midtjylland.

Marcus Rashford Is A Member Of