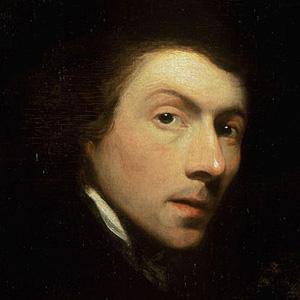 Painter responsible for the unfinished portrait of George Washington, known as The Athenaeum, that appeared on the one-dollar bill and a variety of U.S. Postage stamps.

He studied under Scottish artist Cosmo Alexander in Rhode Island; Alexander helped him with one of his earliest portraits, "Dr. Hunter's Spaniels," which was painted when he was only 14.

He dealt with severe financial debt throughout his life. His work has been displayed in the Metropolitan Museum of Art, the Frick Collection, the National Gallery of Art, the National Portrait Gallery, the Worcester Art Museum, and the Museum of Fine Arts.

He was the third child born to Elizabeth Anthony and Gilbert Stewart. His father was employed by the first colonial snuff mill in the New World. It was located in his family's basement.

He painted portraits of the first six U.S. Presidents, including the second, John Adams.

Gilbert Stuart Is A Member Of