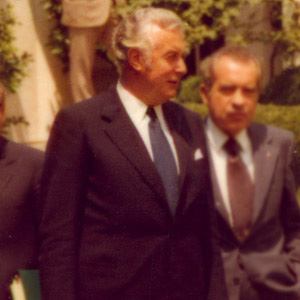 Most Popular#93001
Politician Born in Australia#20

The 21st Australian Prime Minister from 1972 to 1975 who dealt with the 1975 Australian constitutional crisis. He notably instituted universal health care and fee-free university education and eliminated military conscription and criminal execution.

He played in a scene of The Broken Melody, while attending St. Paul's College.

He became the first Prime Minister to be terminated during his term when Governor-General Sir John Kerry dismissed him in 1975.

Entrepreneur Rupert Murdoch supported him during his 1949 labor campaign.

Most Popular#93001
Politician Born in Australia#20

Gough Whitlam Is A Member Of