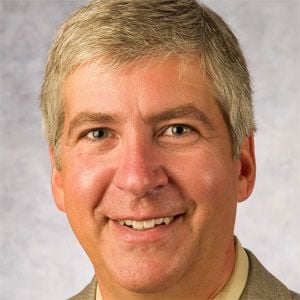 American Republican politician who became 48th Governor of Michigan in 2011.

He studied business while he was still in high school and attended the University of Michigan and attained his Bachelor's degree, MBA, and J.D.

He married his wife Sue in 1987 and the couple had three children together.

Jennifer Granholm preceded him as Governor of Michigan.

Rick Snyder Is A Member Of