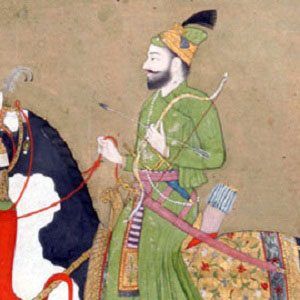 Sikh leader and philosopher who served as the last of the ten Sikh gurus. He is responsible for the popularization of the Sikh practice of covering of one's hair with a turban and passed Guruship of the Sikhs to the Eleventh and Eternal Sikh Guru, the Guru Granth Sahib Ji.

He was born in Patna, India and studied Persian and Sanskrit as a child. He also spent time honing his martial arts skills.

He is responsible for the creation of the so-called "Five K's," the five articles of faith he commanded Khalsa Sikhs to wear at all times.

He was married to Mata Jito and Mata Sundari. He had four children.

His father was Guru Tegh Bahadur, the ninth Sikh guru.

Guru Gobind Singh Is A Member Of