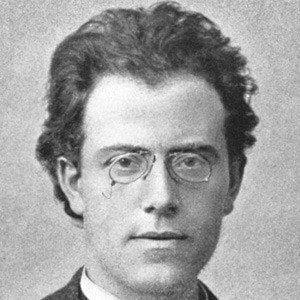 He attended the Vienna Conservatory in the 1870s and later became director of the Hofoper (Vienna Court Opera).

His work greatly influenced the musical development of such composers as Arnold Schoenberg and Benjamin Britten.

He was married to Alma Mahler Gropius Werfel from 1902 until his death in 1911. They had two daughters named Anna and Maria Mahler. He was born into a Jewish family in Kalischt, Bohemia, a village that was, at the time, part of the Austrian Empire.

He was one of the most respected musical conductors of his generation and was particularly known as an excellent interpreter of the operatic works of Wolfgang Amadeus Mozart and Richard Wagner.

Gustav Mahler Is A Member Of