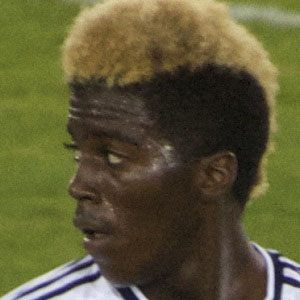 American soccer forward who won his first Major League Soccer Cup title with the Los Angeles Galaxy in 2014. In 2018, he would join the Columbus Crew SC. He made his international debut as a member of the United States national team in 2015.

He began playing for the Galaxy Academy Under-18 squad in 2008. He later led the Cal State Bakersfield Roadrunners to their first-ever NCAA Division I Tournament berth.

In 2014, he became the highest-scoring U.S.-born player in a single season in Major League Soccer history.

He married Madison Goodvin in 2016.

He won the 2014 MLS Cup title alongside goalkeeper Brian Perk.

Gyasi Zardes Is A Member Of