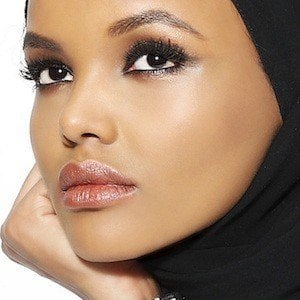 IMG-represented model who made history as the first to wear a hijab and burkini during Miss Minnesota USA. Her first major cover was for CR Fashion Book Issue 10 where she is seen sporting a hijab. She has also landed on the cover of Allure, British Vogue, Vogue Arabia and Teen Vogue.

She got braces in her early teenage years, and would have them while modeling.

In 2017 her face graced a massive American Eagle billboard in the center of Time Square. She also was awarded the 2017 Image Award at Unity Gala. In 2018, she was named an official celebrity UNICEF Ambassador.

She is a Somali-American immigrant and was born in a Kenyan refugee camp.

Halima Aden Is A Member Of