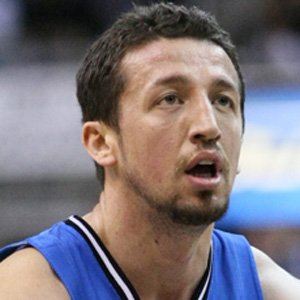 Turkish small forward who began his NBA career with the Sacramento Kings in 2000, then went on to play for the San Antonio Spurs, Orlando Magic, Toronto Raptors and Phoenix Suns.

He was drafted 16th overall by the Sacramento Kings after playing four seasons with Turkey's Efes Pilsen.

He had a breakout offensive season with the Magic in 2008, when he was named the NBA's Most Improved Player; he then helped lead the Magic to the NBA Finals in 2009 where they were defeated by the Los Angeles Lakers.

He had a daughter named Ela with his wife Banu Turkuoglu.

He joined point guard Jameer Nelson for the second time on the Orlando Magic in 2010.

Hedo Turkoglu Is A Member Of