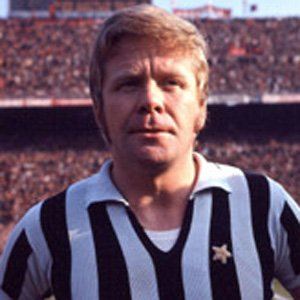 German striker who represented West Germany at three World Cups from 1958 to 1970. He scored 116 goals over his 477-game club career.

He began his professional career with Germany's BC Augsburg in 1957.

His best years were spent in Italy, playing for Bologna and Juventus from 1962 to 1973, both of whom he won Italian league titles with.

He was married to his third wife, Noraimy Rodriguez, from 2003 up until his death in 2012. They had two sons and a daughter together. His nephew, Christian Hochstatter, also played soccer professionally.

He and Rudi Voller both represented Germany in World Cup play.

Helmut Haller Is A Member Of