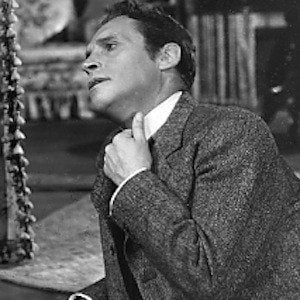 Remembered for playing villains in numerous films of the 1930s, '40s, and '50s, he is perhaps most well known for his roles in The Woman in Green (as Professor Moriarty); Jane Eyre (as Mr. Brocklehurst); and Camille (as the Baron de Varville).

He began his acting career on the English stage, appearing in productions at the Globe Theatre, the New Theatre, and the Theatre Royal, Haymarket. He went on to perform in America, as well, appearing in Broadway productions of Hedda Gabler and The Winter's Tale.

He portrays Hungarian composer Franz Liszt in the 1947 film Song of Love, appearing alongside Paul Henreid and Katharine Hepburn.

Born Charles Henry Daniel, he grew up in London, England. With his wife, Ann Knox, he later settled in Los Angeles, California, where he died in 1963 after suffering a heart attack during the filming of My Fair Lady.

In the 1940 Charlie Chaplin feature The Great Dictator, Daniell plays a character named Garbitsch who was created by Chaplin as a parody of Nazi Minister of Propaganda Joseph Goebbels.

Henry Daniell Is A Member Of