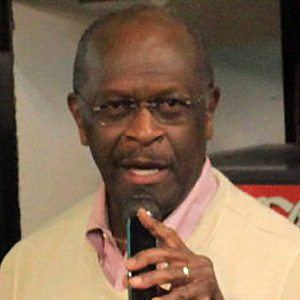 Former CEO of Godfather's Pizza and Tea Party Activist who was a colorful figure in the 2011 Republican presidential primary. Though he led the polls for a period of time he was forced to drop out of the race after allegations of sexual misconduct came to light.

Taking his parents' advice on getting a good education to heart, he studied math and computer science, and worked for the Navy, Coca Cola, and Pillsbury.

During the Republican primary, he proposed his '9-9-9' flat tax plan, which many criticized as more burdensome to the working class than the rich, and suggested - jokingly - that the border between U.S. Mexico should have an electrified fence.

He grew up in Tennessee, to an impoverished family, his mother working as a domestic, and his father's jobs including chauffeuring for the Coca Cola company.

Though he failed in his presidential ambitions, he kept himself in the public spotlight through, among other appearances, a regular segment on Stephen Colbert's late night comedy show.

Herman Cain Is A Member Of