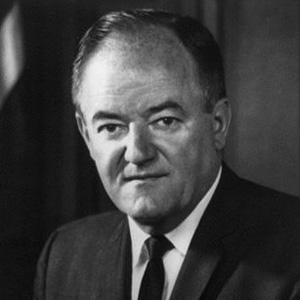 Minnesota senator who ran for the US presidency in 1968 but lost to Richard Nixon. He was the Vice President under Lyndon B. Johnson from 1965 to 1969.

He earned a pharmacist's license and spent seven years employed at his family's drugstore.

He married bookkeeper Muriel Buck in 1934; the couple remained together until his death forty-two years later.

He ran and lost in the 1968 presidential election to Richard Nixon.

Hubert H. Humphrey Is A Member Of