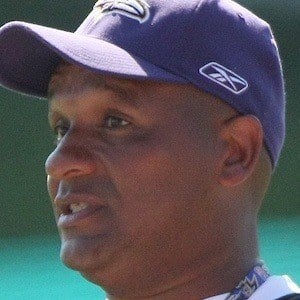 American football coach known for being head coach of the Oakland Raiders and Cleveland Browns. He served as the Bengals offensive coordinator prior to being hired by Cleveland on January 13, 2016. He went 8-8 in his lone season at the helm of the Raiders.

He played quarterback at the University of the Pacific in 1985 and 1986. He then joined the program as a graduate assistant and went on to coach in the Pac-10 before joining the Washington Redskins in 2001.

In his career as an assistant, Jackson has worked under several successful coaches, including Marvin Lewis, Marty Schottenheimer, and John Harbaugh.

He married Michelle Jackson and the couple has two daughters named Baylee and Michelle.

Joining the Browns meant inheriting controversial quarterback Johnny Manziel, whom Jackson immediately said he did not want on the team.

Hue Jackson Is A Member Of