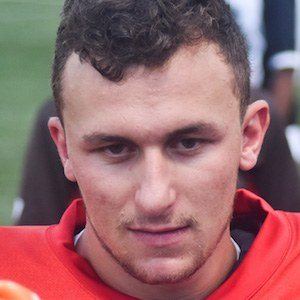 Former star Texas A&M quarterback nicknamed Johnny Football who became the first freshman in history to win the Heisman Trophy in 2012. He was selected 22nd overall in the 2014 NFL Draft by the Cleveland Browns and he signed a 4-year, $8.25 million contract with the Browns in June 2014.

He was named the Senior Athlete of the Year by The National High School Coaches Association after a standout campaign at Tivy High School.

He set a number of records during his collegiate career, including college football records for freshman quarterback rushing yards and total yards in a season.

He is the son of Paul and Michelle Manziel. He married Bre Tiesi in 2018 and the couple split the following year. He began dating TikTok star Kenzie Werner.

He won the prestigious Heisman Trophy in 2012, a year after fellow quarterback Robert Griffin.

Johnny Manziel Is A Member Of