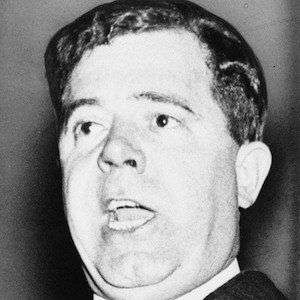 40th Governor of Louisiana from 1928 to 1932 who is the basis for the character Willie Stark in Robert Penn Warren’s Pulitzer prize-winning novel All the King’s Men .He also served as the United Stated Senator from Louisiana from 1932 to 1935.

He obtained a law degree from Tulane University.

He attempted to start the Share Our Wealth movement, which proposed new wealth redistribution measures in the form of a net asset tax on corporations and individuals to curb the poverty and homelessness endemic of the Great Depression. but was assassinated in 1935.

He had three children, Rose, Russell, and Palmer, with his wife Rose McConnell Long.

He was a supporter of Franklin D. Roosevelt , until he began his own run at the Presidency.

Huey Long Is A Member Of