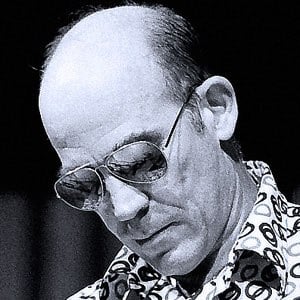 Founder of the Gonzo journalist movement whose legacy includes Fear and Loathing in Las Vegas and Hell's Angels: The Strange and Terrible Saga of the Outlaw Motorcycle Gangs. He became a counter culture icon for his drug use, patriotism, and resounding literary voice.

He got into a lot of trouble in high school and was sent to jail after abetting a robbery. He grew up reading Jack Kerouac and the Beats.

He was the eldest child of Virginia Ray Davison and Jack Robert Thompson, who died when Hunter was young. He was married to Anita Thompson from 2003 until his death in 2005. He had a son named Juan Fitzgerald Thompson.

He was a fierce vocal opponent of Richard Nixon, and used to wear a Halloween mask of his likeness.

Hunter S. Thompson Is A Member Of