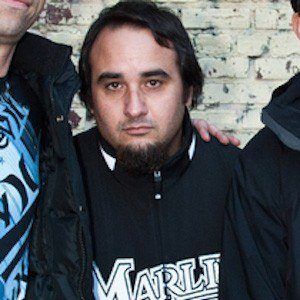 Bassist most well known as one of the founding members of New Found Glory alongside Jordan Pundik, Chad Gilbert, and Cyrus Bolooki. The band has released more than half a dozen albums since their inception and has shared the stage with bands like Hellogoodbye and Alkaline Trio.

New Found Glory formed in 1997 with Grushka and Jordan Pundik. They'd previously been in bands together named Inner City Kids and Flip 60.

He is a member of the musical side project International Superheroes of Hardcore, a hardcore punk band featuring the other members of New Found Glory and their character pseudonyms.

He married Stormy Grushka in 2001 but the couple split in 2010. They had two children named Oliver Layne and Chloe Reese.

Ian Grushka Is A Member Of