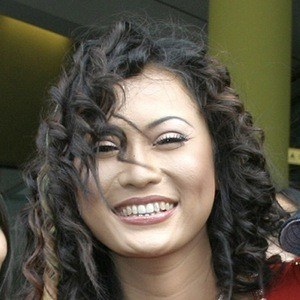 Indonesian singer who became a popular figure with the world of dangdut-style folk music with songs like "Masa Lalu," "Arjuna Buaya" and "Kocok Kocok." She found herself amidst controversy following a televised concert in Jakarta, when conservative Muslim groups publicly objected to her risqué dance moves.

Her stage name "Inul" was her childhood nickname. She began her singing career by singing in a rock band.

At the height of the controversy surrounding her dancing, she was cited as a major reason behind passing anti-pornography legislation in Indonesia.

Her birth name is Ainur Rokhimah. She married Adam Suseno, with whom she has a son named Yusuf.

She and Kristina are both world-famous dangdut singers.

Inul Daratista Is A Member Of