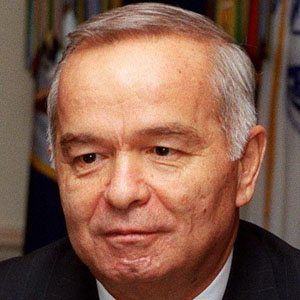 Politician and member of the Communist party who became the first President of Uzbekistan in 1989. His human rights practices have been under constant scrutiny. In fact, in 2002, he was lambasted by activists for having two prisoners boiled alive.

He studied Economics and Engineering in school after being placed in an orphanage in Samarkand at birth.

He supported US President George W. Bush in his 'War on Terror' and allowed for U.S. troop presence at the Karshi-Khanabad base.

He was married to Tatyana Karimova for several years.

Not unlike criminal Adolf Hitler, he has been criticized for his totalitarian rule, human rights opposition, and criminal mischief.

Islam Karimov Is A Member Of