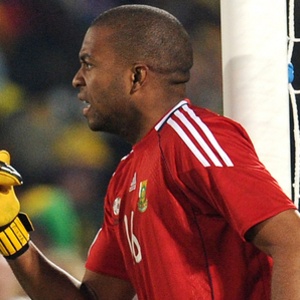 He played his youth soccer with Kaizer Chiefs, starting out as a defender before moving to goalie. He was called up to the senior club in 2004, but didn't make his debut until 2007.

During the 2010 FIFA World Cup, he received a red card for tackling Luis Suarez, making him the second goalie in World Cup history to be sent off.

He was born to Elias and Flora Khune. He grew up with five siblings, one of whom also played professional soccer in the Premier Soccer League.

He and Siphiwe Tshabalala have played together on Kaizer Chiefs.

Itumeleng Khune Is A Member Of