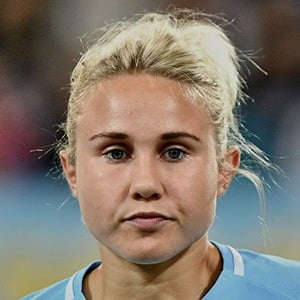 Versatile midfielder and forward who has risen to fame for her play in the FA Women's Super League, including for Manchester City between 2014-2018. She helped lead the club to the 2014 FA WSL Continental Cup title before signing with prominent French club Olympique Lyon in 2018.

She played as the team captain for the University of Birmingham's women's soccer team. She later debuted professionally for Everton in 2008.

She was named the PFA Women's Players' Player of the Year in 2016. She led the England women's national team during qualifying for the 2019 FIFA Women's World Cup.

She was born and raised in Macclesfield, England.

She and Steph Houghton played as teammates for Manchester City WFC.

Izzy Christiansen Is A Member Of