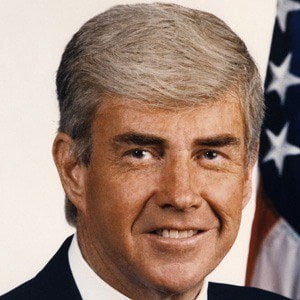 New York congressman from 1971 to 1989 who ran for the U.S. Vice Presidency in 1996 on the Republican ticket. He was also the United States Secretary of Housing and Urban Development and a football player who co-founded the AFL Players Association.

He became a record-setting javelin hurler and member of the football team at Occidental College.

He was a quarterback in the NFL, serving as captain of both the San Diego Chargers and Buffalo Bills and earning the AFL Most Valuable Player award in 1965 after leading the Bills to a second consecutive championship.

He was Housing Secretary under George H.W. Bush.

Jack Kemp Is A Member Of