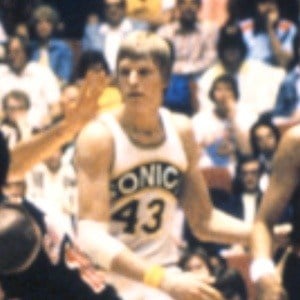 Blonde, curly-haired center who was selected to 7 straight All-Star games as a member of the Seattle SuperSonics from 1979 to 1985. He helped lead the team to the franchise's first and only NBA Championship in 1979.

After a stellar career at Illinois Wesleyan University, he was selected 8th overall by the SuperSonics in the 1977 NBA Draft.

As a versatile center, he averaged almost 90% free throw shooting and a remarkable 32% beyond the three-point arc.

He had three sons, Jacob, Lucas, and Nathan, with his wife Shawn.

Three years after he left the Sonics, they drafted future All-Star center and forward Shawn Kemp.

Jack Sikma Is A Member Of