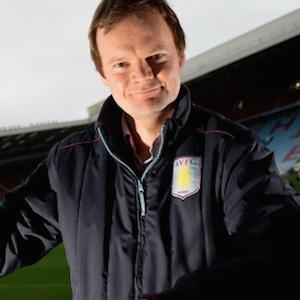 AVTV's commentator/presenter who covers all first team and Under 21 matches. He covers club events such as awards dinners, open training sessions, the kit launch festival, and business events and does freelance football reporting for talkSPORT and voice-overs for ILC media as well.

He worked at Hallam FM radio as a Sports Reporter while studying for a history degree at the University of Sheffield. He then joined TFM radio in Middlesbrough as their Voice of Sport, working on the market-leading breakfast show The Cereal Thrillers.

He wrote and performed Winter Wonderland songs for the three clubs in the areas Middlesbrough, Darlington, and Hartlepool. After 2 years there he moved to Birmingham's BRMB/Capital Gold as a football commentator and then freelanced for BBC Radio Sheffield, Big Blue Radio, The Saint, Swan FM, RealRadio Yorkshire, ITV Digital before becoming Sports Editor at The Villan Radio.

He was born in Worksop, Notts, England.

He commentated on all Aston Villa games alongside a host of former players, including Tony Morley, Ken McNaught, Paul McGrath, Ian Taylor, and Lee Hendrie, among others.

Jack Woodward Is A Member Of