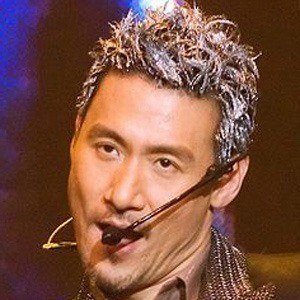 Cantonese singer-songwriter and actor who earned the nickname "God of Songs." He has sold more than 25 million records throughout his career.

He was a reservation officer for Cathay Pacific Airline before winning an amateur talent competition.

The Chinese language media refers to Aaron Kwok, Andy Lau, Leon Lai and him as the Cantopop Four Heavenly Kings.

He married Hong Kong actress May Lo Mei-mei on February 15, 1996. He has two daughters named Yiu-Wah and Yiu-Huen.

He sang a duet with Regine Velasquez for the song "In Love with You," from Velasquez's album Listen Without Prejudice.

Jacky Cheung Is A Member Of