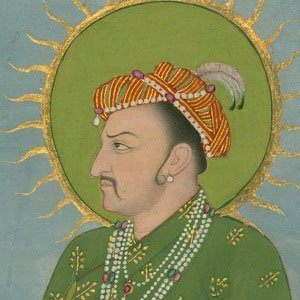 Born Nur-ud-din Mohammad Salim and best remembered by his royal title Jahangir, this sixteenth and early seventeenth-century member of the Timurid Dynasty ruled the South Asian Mughal Empire during the last two decades of his life.

He first attempted to rule his country in 1599, but did not succeed in becoming emperor until 1605.

His reign was marked by imperial expansion and relative political and economic stability. He was also a major supporter of the arts, and Mughal painting and architecture flourished during his reign.

He was born as the royal heir to his father, the Mughal Emperor Akbar. Before he could rightfully ascend to the throne, he attempted to seize power from his father; decades later, his oldest son, Khusrau Mirza, attempted the same thing, and Jahangir had him blinded as punishment for the revolt.

The twentieth-century Indian director and screenwriter Nasir Hussain was responsible for a popular film based on Jahangir's much romanticized, forbidden relationship with a courtesan named Anarkali.

Jahangir Is A Member Of