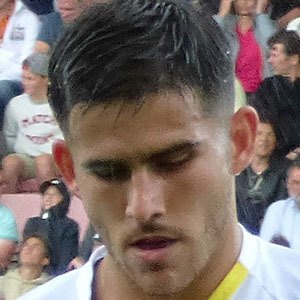 Spanish professional soccer right winger who became a member of Hamburger SV in 2018 after stints with Racing Santander, Mainz 05 and Las Palmas. With Sevilla, his team won the 2013-14 UEFA Europa League.

He began his youth soccer career with Sociedad Deportiva Textil Escudo as a preteen.

His fans have supported him on Instagram where he posts lifestyle and on-the-field photos for 20,000 followers.

He celebrated his 10th anniversary with his significant other in January 2020.

He was coached by Dieter Hecking after joining Hamburger SV.

Jairo Samperio Is A Member Of