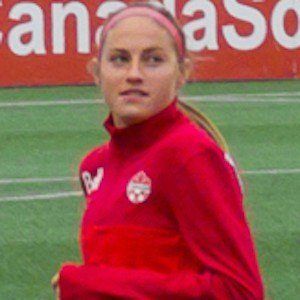 Canadian-American dual citizen known for being a member of Canada's national soccer team, playing forward. She's also been a member of the Houston Dash of the National Women's Soccer League.

After being named Colorado's Gatorade Player of the Year as a senior, she attended Texas Tech University, where she set the school record for career goals.

Although she wound up playing her senior international soccer with Canada, she spent time with the US's U18 and U20 teams growing up.

She grew up with three siblings. Her brother Drew also played professional soccer.

She and Sophie Schmidt have played together on the Canadian national team.

Janine Beckie Is A Member Of