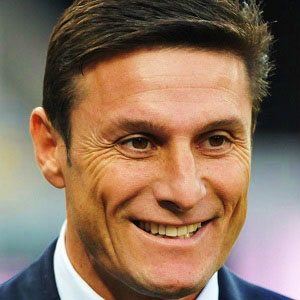 Versatile midfielder and defender who began his long career with Internazionale in 1995, helping the team win the Serie A title 5 straight years from 2006 to 2010 and the UEFA Champions League title in 2010; made 145 appearances for the Argentinian national team from 1994 to 2011.

He made his professional debut with Argentinian team Talleres de Remedios de Escalada in 1991.

He started a charity to help disadvantaged children in Argentina and collaborated on some goodwill projects with FIFA as well.

Growing up, he worked for his father's bricklaying business and his cousin's grocery store, playing soccer in between.

He played under Diego Maradona after Maradona became coach of the Argentine national team in the mid-2000s.

Javier Zanetti Is A Member Of