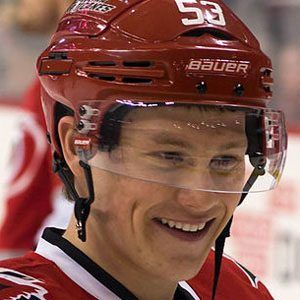 He played his junior hockey as a team member of the Kitchener Rangers starting in 2008 before being drafted in 2010 for the NHL.

He grew up in a big family with four sisters and one brother.

He replaced fellow Canadian hockey player Sidney Crosby in the 2011 All Star Game when Crosby was injured.

Jeff Skinner Is A Member Of