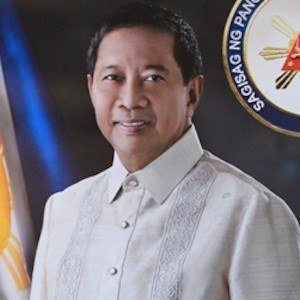 Member of the United Nationalist Alliance political party who served as the 15th Vice President of the Philippines from June of 2010 to June of 2016 under President Benigno S. Aquino III. He ran for President in the 2016 Philippines presidential election.

He served as the Chairman of the Metropolitan Manila Development Authority from 1998 to 2001 before taking over the role of Mayor of Makati from 2001 to 2010.

He was previously a member of the PDP-Laban political party prior to 2014.

He was born Jesús Jose Cabauatan Binay in Manila, Philippine Commonwealth. He married Elenita Sombillo and has five children.

Noli De Castro preceded him in the position of Vice President of the Philippines.

Jejomar Binay Is A Member Of