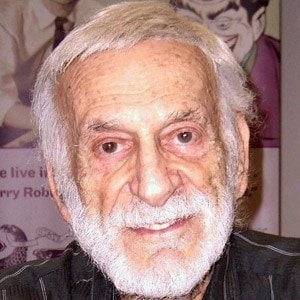 Best known for his work for DC Comics, this artist co-created the Joker character of the Batman comic books. In 2000, he was the recipient of the National Cartoonists' Society's Milton Caniff Lifetime Achievement Award.

He began his work as a comic book artist while studying journalism at Columbia University.

Born and raised in Trenton, New Jersey, he died at the age of eighty-nine in Staten Island, New York.

In the late 1930s, he was hired by artist Bob Kane to provide inking and lettering work for the newly-created Batman series.

Jerry Robinson Is A Member Of