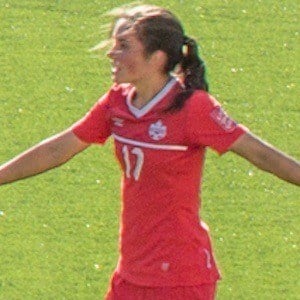 Canadian international midfielder who made her debut with the national team when she was only 15 years old. She played at the 2015 Women's World Cup.

She first played for Canada's U17 team, helping them quality for the 2014 U17 World Cup.

She committed to play college soccer at UCLA. She was also a junior track champion in the 3000 meters.

She grew up in London, Ontario.

She and Desiree Scott have been teammates on the Canadian national team.

Jessie Fleming Is A Member Of