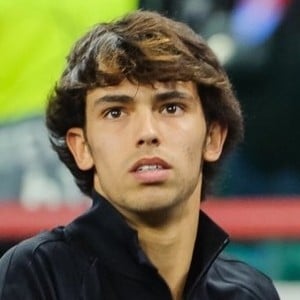 Portuguese professional football player who is known for his work as an attacking midfielder for the Benfica football club. He is also known for having played as a midfielder on several Portuguese youth national teams including the under 18, 19, and 21 squads. In 2019, he signed a seven-year contract with Atlético Madrid.

He first started his youth career playing for the Os Pestinhas club in 2007. He then moved to Porto the following year and Benfica in 2015. His senior career started with the Benfica B team in 2016 and he joined their first senior squad in 2018.

He is known for having won the Campeonato Nacional de Juniores during the 2017-2018 season with the Benfica club.

He was born and raised in Viseu, Portugal. In 2019, he began dating model Margarida Corceiro.

Other Benfica players also known for their work as a midfielder include Nico Gaitan and Felipe Augusto.

João Félix Is A Member Of