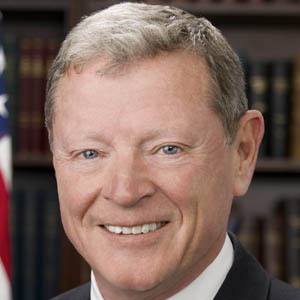 Republican politician who became a Senator from Oklahoma in 1994 after serving in the House. He has served as a member of Armed Services Committee and the Environment and Public Works Committee.

He started out as an insurance salesman, eventually rising to become President of Quaker Life Insurance Company.

He is an accomplished pilot and to date the only member of Congress who flew a plane around the world.

He has a total of twenty children and grandchildren with wife of over fifty years, Kay.

Although he was Republican, he voted against Ronald Reagan's proposed budget in 1987 because it raised taxes.

Jim Inhofe Is A Member Of