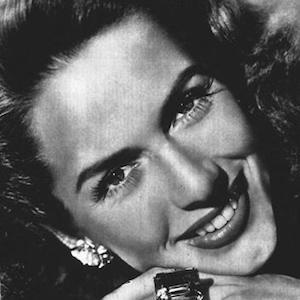 Famous as both a model and an entertainment personality, she graced the covers of numerous magazines, appeared on Broadway and in several B-movies, and co-hosted early radio and television talk shows with her husband.

She and her brother Bob were avid tennis players in their youth; Bob Falkenburg, in fact, won the 1948 men's singles event at Wimbledon.

Through her political activism, she was instrumental in convincing Dwight D. Eisenhower to enter the 1952 U.S. Presidential election.

Born Eugenia Lincoln Falkenburg to Eugene and Marguerite Falkenburg, she spent her early years in Spain and Chile and her adolescence in Los Angeles, California. Her marriage to journalist and media personality Tex McCrary produced sons named John and Kevin.

During her modeling career, she was photographed by Edward Steichen.

Jinx Falkenburg Is A Member Of