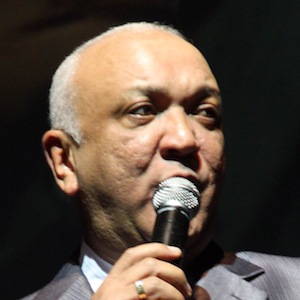 Dominican announcer, presenter, comedian, and television host who is best known for co-hosting the nightly program The Night Show during the late 1980's. He is also known for running and hosting his own program Funny with Jochy.

He studied Marketing and Sales as Pedro Henriquez Urena National University before dropping after two years to pursue a career as a radio announcer. In 1991, he went on to announce for television with a recurring role on El Show de la Noche.

He has earned several awards and acknowledgements for his accomplishments in television including several Casandra awards for Best Presenter, Best Entertainer, and Best Radio Show.

He married Luisa Saldana in 1982 and together they have four children. His son Eduardo is also a television presenter.

He worked alongside fellow comedian and presenter Felipe Polanco on the series Cuentos y Cantos.

Jochy Santos Is A Member Of