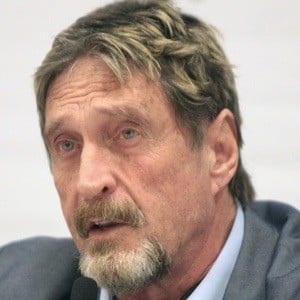 Computer programmer who founded McAfee, Inc. to help computer owners detect and remove spyware and viruses from their computers.

He worked as a programmer for NASA's Institute for Space Studies in New York City.

His neighbor Gregory Faul was murdered in 2012 in Belize, and McAfee left the country before he could be questioned by the local authorities.

He married and divorced his wife Judy. He was an avid practitioner of yoga.

He has made appearances on the Larry King Live television show.

John McAfee Is A Member Of