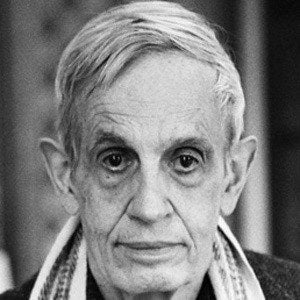 Mathematician who is best known for his works in game theory and who was the subject of the 2001 Academy Award-winning film A Beautiful Mind. He had a well-known period of mental instability in his middle years, which was ultimately diagnosed as paranoid schizophrenia. He shared the Nobel Memorial Prize in Economic Sciences in 1994.

He earned a doctorate from Princeton in 1950 with a 28-page dissertation on non-cooperative games.

He sought help and found ways to manage with his mental illness and was recognized once more for his work in 1978, when he won the John von Neumann Theory Prize.

He married Alicia Lopez-Harrison de Lardé, a naturalized U.S. citizen from El Salvador, in 1957. They divorced in 1963, then re-married in 2001. He had two sons named John Charles Martin and John David Stier.

Russell Crowe portrayed him in the 2001 Best Picture winner A Beautiful Mind.

John Forbes Nash Is A Member Of