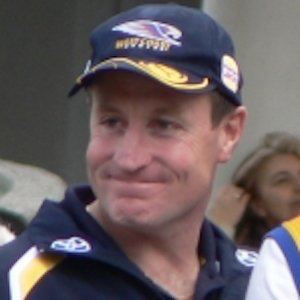 Australian rules football coach known for his time at the helm of the West Coast Eagles, where he amassed a 149-130-2 record in 12 seasons with the team. After three years away from the game, he took over Essendon at the start of 2016.

An accomplished football player, he also played with West Coast for a dozen years, earning 209 caps while serving as captain from 1991 to 1998.

His coaching career with West Coast was filled with extreme highs and lows, as he became the fourth person to lead the same team to the AFL premiership as both coach and captain, but also "won" the ignominious wooden spoon award when he went 4-18 in 2010.

He has three children with his wife Georgina, who he married in 1994. His younger brother was also an AFL player.

Chris Judd served as West Coast captain in 2006, when Worsfold led the club to the premiership.

John Worsfold Is A Member Of