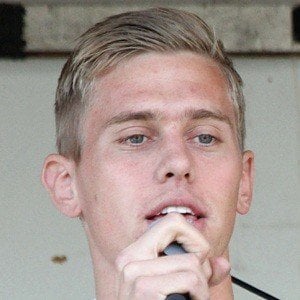 Multi-talented singer-songwriter and television personality who is notable for some of the most popular Icelandic songs of all time with "All You I," "Ljúft að vera til," "Gefðu allt sem þú átt" and "Your Day." His debut album Wait for Fate was certified Gold in 2013. He was a judge on Iceland's Got Talent for two seasons.

He participated in local music school and both high school and college productions. His first big hit was called "When You're Around."

He was named Best New Artist at the FM957 People‘s Choice Awards in 2011 and was nominated for Most Promising Act at the Icelandic Music Awards a year later. In addition to his music career, he is a national champion as a member of the Icelandic football club FH Hafnarfjordur.

He moved to America and graduated from Boston University in 2009 with a degree in economics before returning to his hometown of Hafnarfjordur, Iceland to be a professional musician.

He provided his voice for Icelandic voice-over opportunities on the animated films The Lorax, Despicable Me 2, Rio 2 and Minions. He filled the role occupied by Danny Devito for The Lorax.

Jon Jonsson Is A Member Of