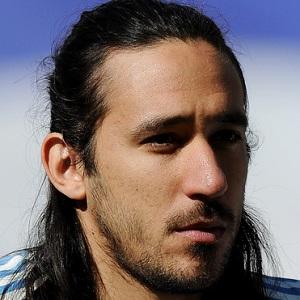 Argentine soccer player who has won league titles with clubs like Velez Sarsfield and Newcastle United. He won the South American Youth Championship with Argentina in 2003 and represented the country at the 2010 FIFA World Cup.

He played youth soccer for Velez Sarsfield before playing for the club's senior team from 2001 to 2005.

He earned the nickname "Spider-Man" after putting on a mask of the superhero in celebration of a goal he scored while playing for RCD Mallorca.

He has dated model Alejandra Maglietti.

He played alongside Argentine superstar Lionel Messi at the 2010 FIFA World Cup.

Jonas Gutiérrez Is A Member Of