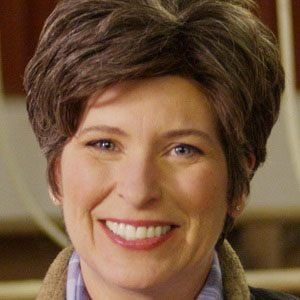 After serving a three-year term in the Iowa State Senate, this Republican Party politician was elected a United States Senator from Iowa. She was the first female politician to represent her home state of Iowa in either the House or the Senate.

After earning a a bachelor's degree from Iowa State University and a master's degree from Columbus College, she became a lieutenant colonel in the Iowa Army National Guard. She also served in the Army Reserve and spent more than a year in Kuwait during Operation Iraqi Freedom.

A staunch social conservative, she fought for gun owners' rights; opposed abortion and same-sex marriage; and proposed the elimination of the Environmental Protection Agency and the Department of Education.

She was born and raised in Red Oak, Iowa. She and her husband, U.S. Army Major Gail Ernst, became parents to a daughter named Libby.

Upon deciding to run for an Iowa seat in the U.S. Senate, Ernst was endorsed by Iowa's Lieutenant Governor, Kim Reynolds, as well as by Sarah Palin and Mitt Romney.

Joni Ernst Is A Member Of