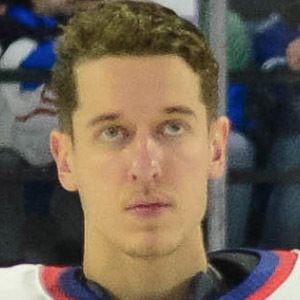 Goaltender who rose to fame for his time with the St. Louis Blues. He became the winningest rookie goalie in NHL playoff history during the team's 2019 Stanley Cup Finals run, winning 16 goals en route to the championship.

He became the NHL's first rookie goaltender to record a shutout in the Stanley Cup Playoffs in 2019. He was named to the 2018 AHL All-Star Game.

He was born and raised in Richmond Hill, Ontario, Canada.

He and Ryan O'Reilly won the Stanley Cup as teammates for the St. Louis Blues in 2019.

Jordan Binnington Is A Member Of