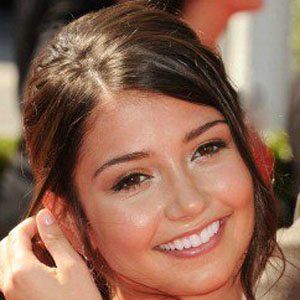 Degrassi's Imogen Moreno who went on to play Aria on Totally Amp'd and Tiara on Really Me. In 2015, she began playing Mikayla Walker on the series Open Heart. She later appeared in Bring It On: Worldwide Cheersmack.

She appeared in her first short film, For All the Marbles, in 2006. She is trained in singing and dancing.

She has had film roles in Stir of Echoes: The Homecoming and Your Beautiful Cul de Sac Home. She starred in an Xbox commercial alongside the Jonas Brothers.

She grew up with a brother named Joe. She was romantically linked to hockey player Jeff Skinner in 2012.

She acted alongside James Gandolfini in the 2013 TV movie Nicky Deuce.

Degrassi: The Next Generation
Really Me
Open Heart