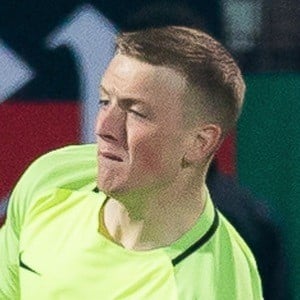 Goalkeeper for the Premier League club Everton FC beginning in 2017 who was previously with Sunderland. While with Sunderland, he was loaned to six other squads. He became the England national team goalie in 2017.

He was part of Sunderland's academy, reserve, and senior teams beginning with their youth system in 2002.

He received his first call-up from the full England national team for the 2018 World Cup qualifier against Slovenia in 2016. He was the England Under-21 Player of the Year in 2017.

He was born in born in Washington, Tyne and Wear, England. He is married to Megan Davison; they welcomed a son, Arlo, in February 2019.

He played with captain Harry Kane for the England national team.

Jordan Pickford Is A Member Of