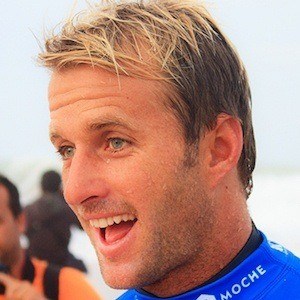 Australian surfer whose accomplishments include winning the 2015 Big Wave Tour event and becoming a multiple-time Airshow World Champion. He is known in the surfing community for his superior tail wafts and aerial flips.

He honed his surfing skills on the Snapper Rocks in Gold Coast, Australia and was a member of the Snapper Boardriders Club.

He invented his own surfing maneuver called the Kerr-upt Flip.

He married Nikki Kerr in 2006 and has children named Colin and Sierra. When he was eleven years old, his father passed away from a heart attack while windsurfing.

In 2002, he was hit by a car in Oahu, Hawaii. He was found by surfing legend Kelly Slater, who called an ambulance.

Josh Kerr Is A Member Of