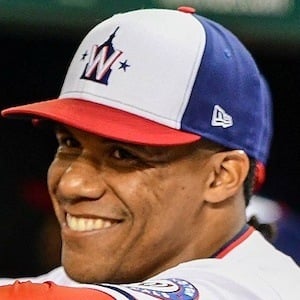 Outfielder who made his MLB debut with the Washington Nationals in 2019 at the age of 19. He helped the Nationals win their first-ever World Series Championship in 2019.

He was named the Golf Coast League MVP in 2016.

He was born and raised in Santo Domingo, Dominican Republic. His father, Juan Sr., was also a standout baseball player.

He became the youngest player since Ken Griffey Jr. to be intentionally walked in a game in May 2018.

Juan Soto Is A Member Of